The Curse of the Pom Pom Weed 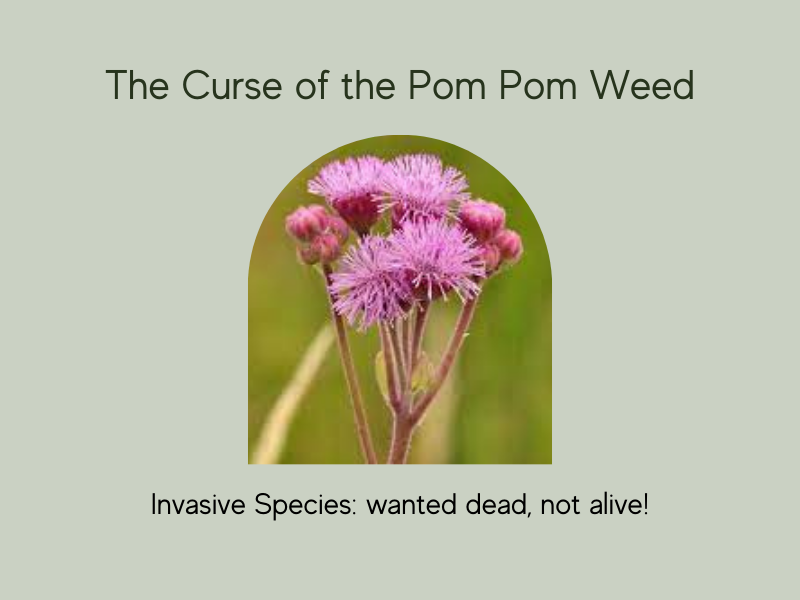 The pom pom weed (Campuloclinium macrocephalum) was introduced into South Africa from Brazil as an ‘ornamental flower. It has since spread into the wild and established itself in many areas of South Africa.

It is a highly invasive weed and becoming a serious threat to the conservation of grasslands in South Africa. The curse of the pom pom weed is that once established it causes serious degradation of the veld. “In certain parts of the country infestations of pom pom weed have totally taken over grazing areas on farms and nature reserves.” Mark Robertson of KZN Wildlife. If anyone finds any new plants in the areas, to please contact Mark on 083 608 3742.

The pom pom weed stands up to 1.5m in height and is easily recognised during the flowering season between December to March. The pink flowerheads are produced in dense clusters at the end of the stem and look like bright pink powder puff’s. During winter the plant is not visible above the ground.

Pom pom weed is a listed invasive species and we need everyone from land owners to visitors to report sightings of the weed. It is a difficult plant to eradicate and all person are welcome to contact Mark Robertson and he will provide details on how to eradicate them. Please help raise awareness so that we can tackle the curse of the pom pom weed!

BOOK DIRECT & SAVE Best rates you do not want to miss !