Tugela Falls claims the No.1 Spot 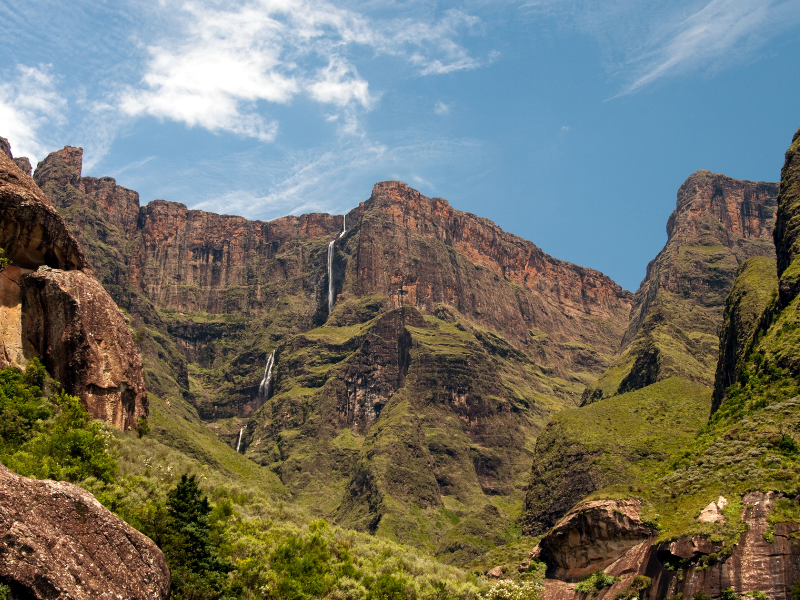 Tugela Falls is now accepted at the tallest waterfall in the world. Initially it was believed to be the second highest waterfall after Angel Falls. However, after a revisited validation was done it turns out that it could be the tallest!

The World Waterfall database has stated that the measurement it not 100% accurate. But it is extremely likely that Tugela Falls is the tallest waterfall in the world. It now claims the No.1 spot after Angel Falls in Venezuela.

The Tugela Falls are located near the source of the Tugela River in the Drakensberg, within the Royal National Park. What starts out as a stream high up in the mountains, becomes the Thukela River that makes it way to the Indian Ocean. Access to the summit is via two chain ladders and forms part of a hiking trail that leads up to the top of the escarpment. It is not for the faint hearted or those who suffer from fear of heights! It is a popular day hike up to the falls that begins at the Sentinel Car Park, situated on the Free State side of the Royal Natal National Park.

The hike is for the adventurous, considered a moderate to difficult hike depending on fitness level. There are numerous other routes to the Falls, with some routes being more manageable than others. The easy 7km gradient up the Tugela Gorge winds through beautiful indigenous forests. I am almost compelled, now more than ever, to take a hike up to the falls. Considering it is literally in our back yard, there should be no reason not to attempt it!

The Tugela Falls Hike is an experience worth considering – add it to your list of must do’s and when you do, be sure to send us your photos from the top!

BOOK DIRECT & SAVE Best rates you do not want to miss !